The LArTPC Detectors and Event Reconstruction

The development of the liquid argon (LAr) ionization chamber, pioneered by Wills and Radeka was an important advance in high energy calorimetry, and was quickly followed by the Rubbia's proposal of using LAr time projection chamber (LArTPC) for neutrino physics. At present, there are two LArTPCs constructed and operated for neutrino physics measurements: the ICARUS detector in Italy and the ArgoNeut detector in the US. For the near-term, a three-LArTPC configuration with MicroBooNE detector being the first will be implemented at Fermilab Booster Neutrino beamline to search for a light sterile neutrino and to precisely measure neutrino-argon interaction cross section. In the future, a set of LArTPCs will be installed at Sanford Underground Research Facility (SURF) for Deep Underground Neutrino Experiment (DUNE) to search for CP violation in the lepton sector and determine the neutrino mass hierarchy.

Event reconstruction is one of the most challenging tasks in analyzing the data from current and future large liquid argon time projection chambers (LArTPCs). The performance of the event reconstruction holds the key to many potential future discoveries with the LArTPC technology including i) searching for new CP violation in the leptonic sector, ii) determining the neutrino mass hierarchy, and iii) searching for additional light (sterile) neutrino species.

When energetic charged particles pass through the detector medium, they will ionize argon atoms. These ionization electrons are effectively a record of the locations and amount of energy deposited in liquid argon. This record can be extracted from the detector volume by applying an electric field, which will make these electrons drift until they pass through a series of three planes of parallel readout wires. Each plane is oriented at a different angle with respect to the others.

As the charge drifts past the first two planes and is collected on the last plane it produces electrical signals on the nearby wires. These signals, which are long-range and position dependent, are then digitized and recorded. The wire pitch and the sampling frequency coupled with the electron drift velocity give a fine spatial resolution at the scale of a few millimeters. Detailed description of the TPC signal simulation can be found in this paper. 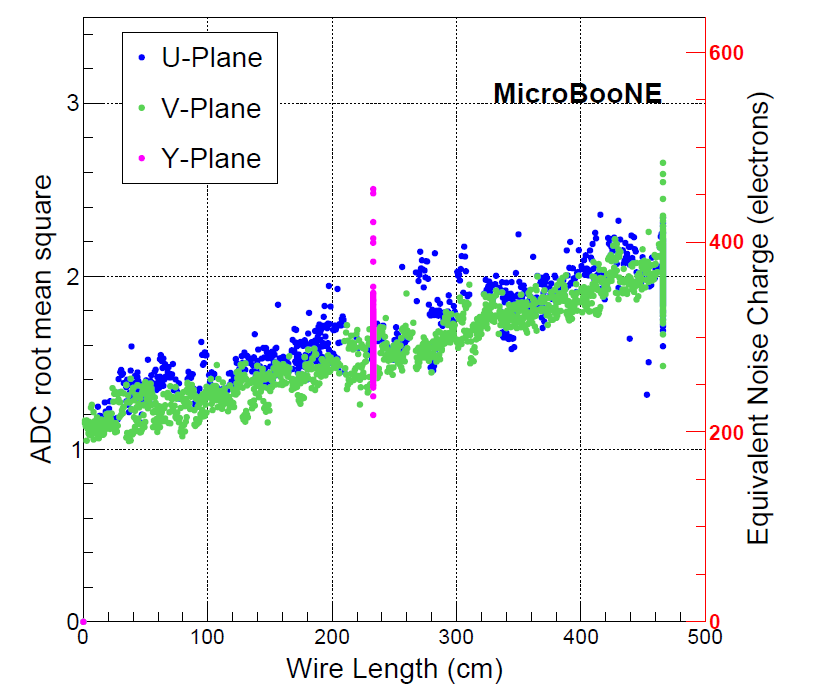 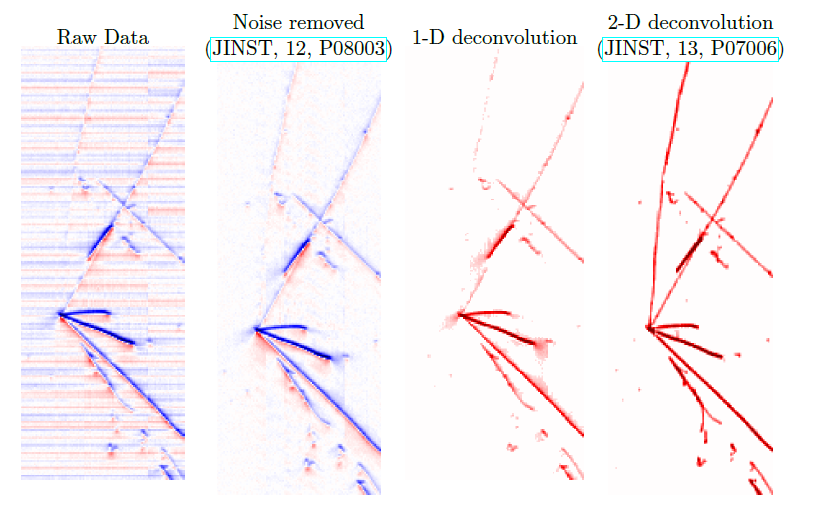 Most recently, by introducing the deep neutral network to the signal region of interest detection, we further improved the TPC signal processing.

Wire-Cell is a novel tomographic event reconstruction method, which is being developed aiming to solve the long-standing problem of automated 3D neutrino event reconstruction in LArTPC. The principle of Wire-Cell strictly follows the principle of LArTPC, that is, the same amount of ionization electrons are observed by all the wire-planes. Using both time and charge information, 3D image of the event topologies are firstly obtained. Further reconstruction steps including the clustering, tracking, and particle identifications (PID) are then directly applied to the 3D image. The application of Wire-Cell 3D image reconstruction on MicroBooNE can be found in this paper. 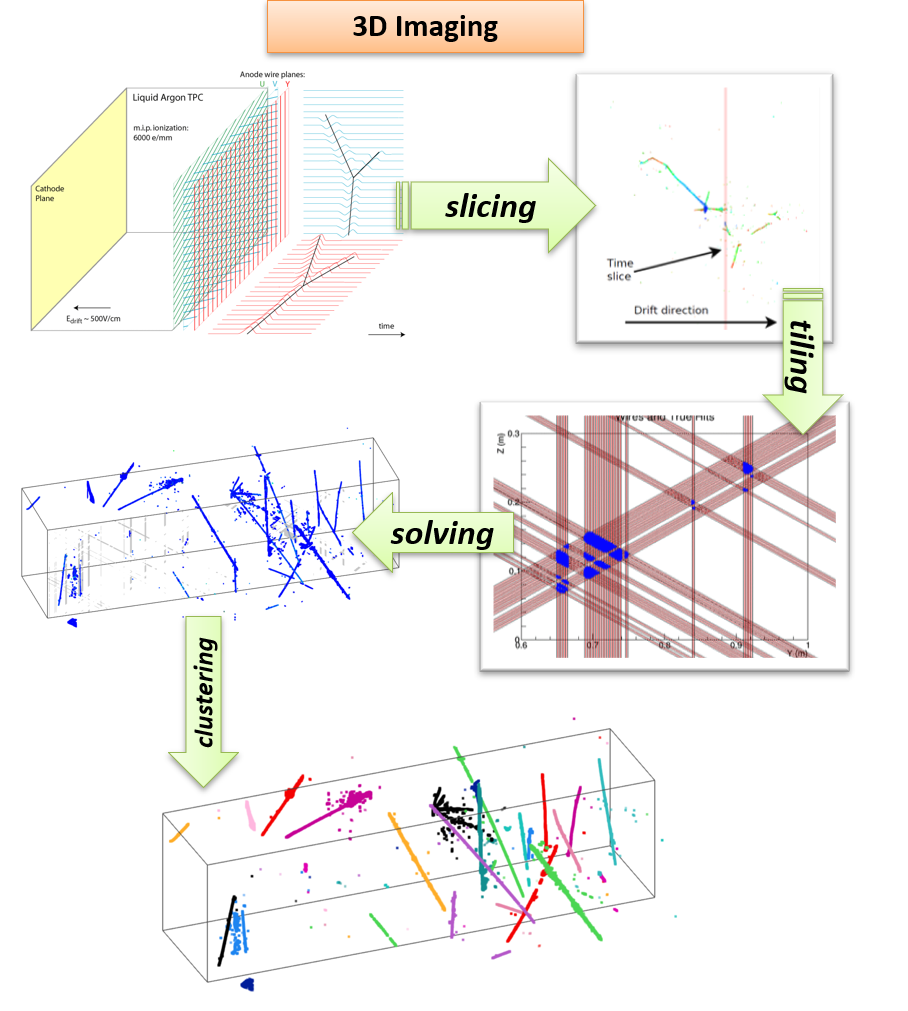 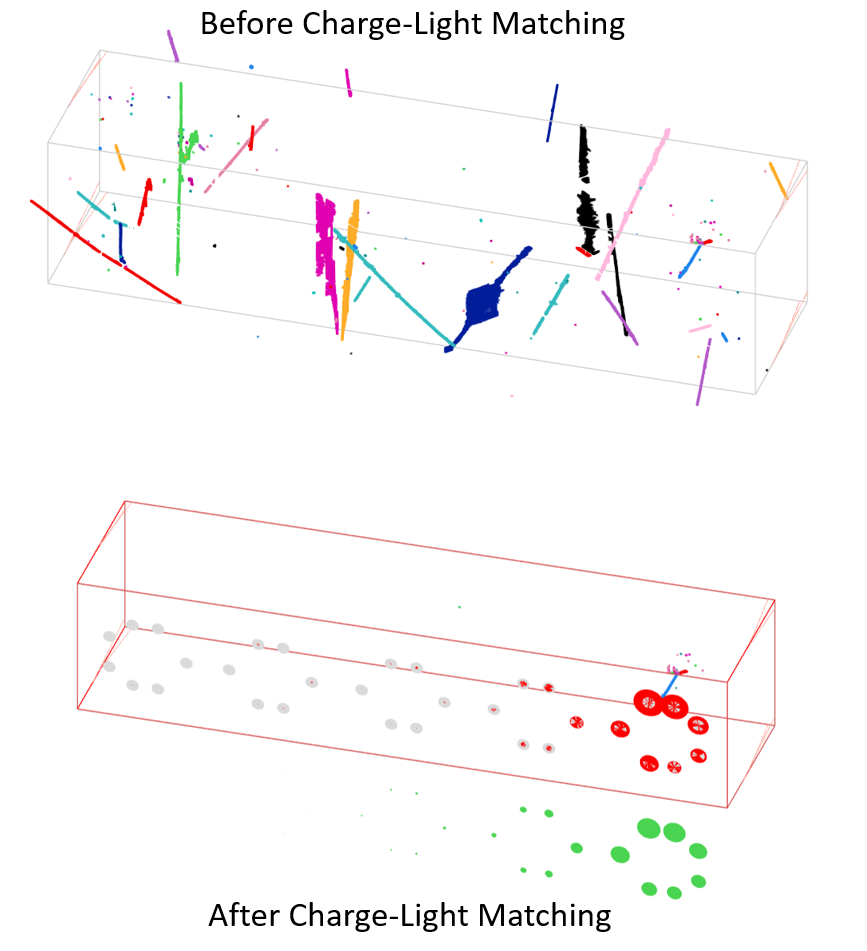 Beside TPC ionization charge signal, LArTPCs also provide scintillation light signal, which can be used to determine the event time (also called t0). Together with the measured arrival time of the charge signal, the position of the TPC activities along the electric field can be reconstructed. For a LArTPC operating near surface that is bombarded by the cosmic-ray activities, multiple TPC charge clusters and light flashes are recorded. Since the charge and light signals are typically recorded by separate detectors, the matching of the charge and light signals are crucial to select rare neutrino activities from the sea of cosmic activities.

We developed a novel many-to-many TPC-charge/PMT-light matching algorithm, which aims at matching all light signals with all charge signals. This technique is crucial in achieving the high-performance generic neutrino detection in MicroBooNE. 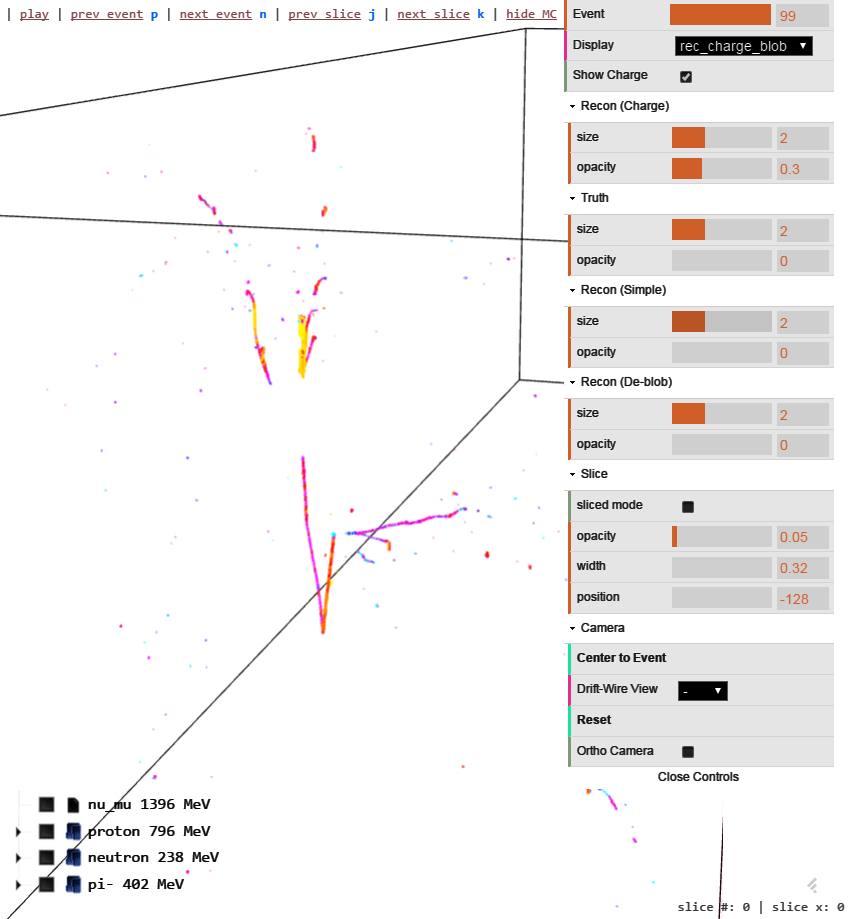 A novel web-based event display Bee (why the name?) is being developed to visualize different types of LArTPC events reconstructed by Wire-Cell. Bee uses WebGL to draw interactive 3D graphics in the browser through the three.js JavaScript library. The list of compatible browsers can be found here.

With the Bee event display, users can freely examine the details of event topology in the 3D space, compare the performance of different reconstruction results, show the true Monte-Carlo trajectories, enter the sliced mode to view the development of tomographic images, and even play the animations in fullscreen.